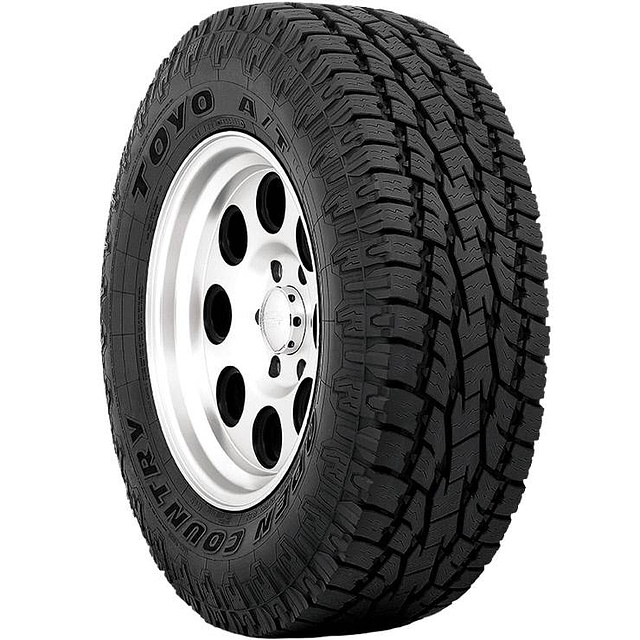 The Toyo Open Country AT2 is a popular all-terrain tire that is suitable for on-road use but also for occasional off-roading. The tire comes in three versions p rated, lt rated and extreme with the p rated having the least tread depth and the extreme having the most. LT rated tires have a deeper tread and they weigh around 5 to 10 lbs more than a similar p rated tire. The extreme version of these tires work well on loose sand, dirt, and forest roads and feature good traction when off-roading. The tires come in a range of sizes from 15 inch wheel diameters all the way upto 22 inch wheels

What is the warranty on these tires?

What is the maximum load and tire pressure?

Are they good for off-roading?

How do they perform on wet roads?

Traction with these tires is pretty good on dirt and wet roads in the beginning but once you go past the 20,000 mile, the tires performance on wet roads starts to degrade and they start to lose traction on wet surfaces

How do they perform in snow?

These tires are decent in mild snow, however they don’t do very well in deep soft snow or wet snow as they tend to fill up the tread. There is however an AW version of this tire that is sold in Canada that is 3 peak rated and that does perform quite well in different snow conditions.

What Are The Complaints About This Tire?

There have been some complaints about vibrations, noise, sidewall cracking, and tires wearing out at around 25,000 to 30,000 miles. This could be due to these people not balancing and rotating their tires or more likely it could be that they received a bad set.

LT vs P Rated – Which To Choose?

How Do The Toyo AT2s Compare With Other Tires?

Toyo at2 vs Toyo Open Country at3:

The new open country at3 comes with a bigger S-shaped tread block in the center, so that is likely going to give you a bit better grip and traction compared to the at2. Also, Toyo has given the at3s a better rating for both winter and wet handling compared to the at2 and the at3s are mountain snowflake rated as well.

The bfg ko2 are around 10 percent heavier than the at2 and they come in all the sizes that the toyo at2 comes in except 22-inch rims. The ko2’s are more suited to bad weather conditions, so if you plan to do a lot of off-roading in the mud or if you live in a place that gets a lot of snow, the ko2 would probably be a better option. Although the at2s have more miles on the warranty that shouldn’t be of much concern as the ko2’s are known to last a long time. Also, unlike the at2, the ko2s are 3 peak  mountain snow flake rated.

The Toyo R/Ts compared to the at2 will perform better in snow, sand and mud and the ride quality is pretty similar to the at2. They also have slightly more of a hum compared to the at2 but unless you’re really listening for it you’re probably not going to notice it.  The tread and sidewall also look tougher on the R/T and the tires weigh around 3 to 7 lbs more than the at2 tires and they also have slightly more tread depth. However, since the at2’s are lighter you might see like 1 to 2 extra miles per gallon over the R/T. The R/T also comes in all the sizes that the at2 comes in but additionally, it also comes in 24-inch sizes.  Toyo has also given the R/Ts a better off-road and wet handling rating compared to the at2s

Both the nitto terra grappler g2 and toyo open country at2 are made by the same company and you aren’t going to notice much of a difference between these tires. Terra grapplers were previously known for wearing out quickly but they reportedly now use a new compound, so they will likely last you as long as toyos.

Here are a list of lug nut torque specs and sizes for the Tesla model 3, model S and model X. Reference the model and year in the table to see what lug nut torque and lug nut size is applicable for your car.