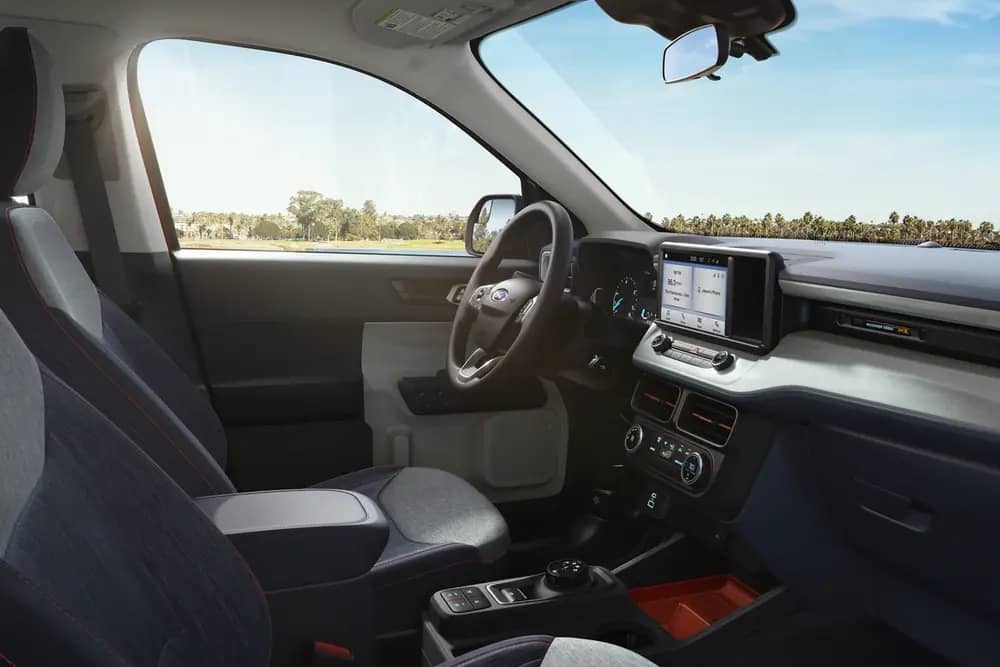 The 2022 Ford Maverick interior has quite a youthful feel to it with its orange accents and quirky design and is at a price point that makes it more affordable than most other trucks in the market.  It features orange accents on the ac vents, door handle, and the center mat and there is also a composite-like material which they call speckled plastic on the dash and door trim. The car doesn’t pretend to have anything other than plastic on the interior as it doesn’t feature any kind of fake leather or fake materials.

The 8-inch touch screen features apple carplay and android auto.  The screen has a small hole next to it which I guess is for storage or maybe there might be an option for a larger screen later. The instrument cluster on the XL and XLT variants are smaller in size at 4.2 inches while the Lariat’s instrument cluster is at 6.5 inches. The 6.5 inch cluster is optional though on the XLT.

As you can see here, the gauge cluster in the hybrid version of the Maverick does not have a tachometer but instead, it shows the power usage in kilowatts.

In the center console, you have the rotary gear dial, as well as a cup holder and more storage pockets.  There is also a wireless charging pad which is only available as an option on the Lariat. The button below the gear knob is the electronic parking brake. The first row of three buttons below the gear knob let you select the drive mode (normal, sport, eco, mud/ruts, sand and slippery) , turn off traction control and auto hold in traffic. In the second row, the first button with the A symbol is for auto start-stop which stops and restarts the engine to reduce fuel consumption and the button next to it is for hill descent control which is to set a fixed speed when descending downhill. The official specs say that the auto start-stop comes as standard on the hybrid engine across all three variants and is optional on the ecoboost.

In the rear compartment of the Maverick, you have quite a bit of  underseat storage. While designing the car they decided to shift the fuel tank behind the cabin which enabled them to offer a good amount of underseat storage. Keep in mind though that with the hybrid version, the 12 volt battery is located underneath the seat, so you do lose some of the capacity and you only get the full capacity with the non hybrid veresion where the battery is located under the hood

The rear compartment also has a household charging port and two usb ports, as well as something called a fit slot below the charging ports in which you can clip accessories like a cup holder or an ipad onto it. Ford themselves will sell you these accessories so that they match the dimension of the slot or you can 3D print them yourself. There are more of these fit slots in the underseat storage as well. The usb ports at the rear only come with the lariat model as standard and are optional on the XLT. The 400w/110v outlets at the rear and truck bed are optional only on the XLT and Lariat.

One of the noticeable aspects of the design is that the door handle has been cut to make space for storing a 1 liter bottle and the door handle is cantilevered so that you can grab it either from the top or from the side but it does look a bit odd. The rear seat door also has space to store a bottle as well as other things since instead of putting the speakers in the rear door frame, they put it in the seat pillar

The Ford Maverick comes with a 6 speaker AM/FM stereo system as standard on all three variants and the B&O 8 speaker system pictured here is only available on the Lariat.

Navy pier interior on the XLT variant. Although it isn’t shown here, the XLT is supposed to have the rear armrest with cup holders as standard like in the Lariat. The XLT only has manually adjustable seats but the power-adjustable driver seat, as well as heated seats, are available as an option.

Desert brown Activex seats on the lariat. The ActiveX seats aren’t leather but what ford describes as a high-end synthetic seating material. Power adjustable driver seat comes as standard. Heated seats are an option on both the XLT and Lariat but only the Lariat has the four way optional headrest. Also, only the Lariat features Dual-Zone Electronic Automatic Temperature Control  while the other two variants have manual air conditioning

Other features of the three variants:

2. Cruise control is available and standard only on xlt and lariat

3. Power moon roof is optional across all three variants

4. Heated wiper park is optional only on xlt and lariat

5. Push start button is available only on lariat and comes as standard

7 . All variants feature two front USB Ports (One Type-A and One Type-C)